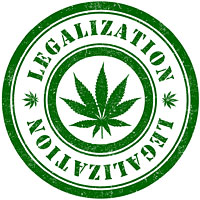 When 64 % of the voters in Miami Beach in a straw ballot said they would support medical marijuana last month, it was no surprise.

Pot smokers may not wear rainbow flags, but they have finally come out of the closet. Their colors are a bright green.

For forty years, since early in the 1970’s, the National Organization for the Reform of Marijuana Laws (NORML) has been fighting to change repressive and regressive laws against the responsible use of cannabis by consenting adults. Many new organizations are joining the fray. Welcome to the party. It’s not just time to light up though. We have a ways to go. In 30 states, pot is still illegal.

The truth is that the ‘war on drugs’ was never a war on drugs. It was a war on good and decent people, whose only crime was smoking a joint at the end of the day. It was a war on your friends, many of whom you know went to jail, lost their property, and were disgraced in the community. What bullshit that was, huh?

Most Americans have always known that the horror stories about pot consumption were delusional hallucinations thrown upon us by cowardly politicians who were afraid to be seen as ‘soft on dope.’ Today, though, cannabis consumers realize they can trust their own experiences more than the government’s forked tongues.

The government that is still raiding medical dispensaries is holding onto the vestiges of a policy as sure to unravel as prohibition against alcohol once did. Cannabis consumers are no longer want to be illegal bootleggers or rumrunners. We are first class entrepreneurs, building small family-owned businesses, starting collectives, marketing vaporizers, lecturing about medical uses, and making America realize how right we have always been about pot.

In 20 states where citizens have been asked if they want pot to be decriminalized, they have resoundingly said ‘yes.’ Current Gallop polls in fact have showed that a majority of nearly 60% of Americans wants pot legalized.

A stunning Florida poll released just a week ago, conducted by a Canadian firm, suggests that 82% of Floridians support medical marijuana. It may even be on the ballot next year, but not surprisingly, the conservative and Republican Attorney General and governor are opposing the initiative. They are stuck in the past that has passed them by.

Every state that gets to vote on decriminalization will overwhelmingly support it, in both red and blue counties. Pot has only one color- green- and only one party- everyone is now in it, from teenagers to baby boomers.

The world is catching up with what we always knew. Now if our political leaders spent less time buying cocaine on the side they could focus on making pot legal. It isn’t because we are all stoners, though many of us are. It is because we as Americans are fed up and disgusted with the lies and laws our legislators have passed and prosecuted.

Over four decades, we have empowered our government to enact draconian measures that have compromised our civil liberties and sacrificed common sense. We are fighting back, against spying, surveillance and stupidity. We are fighting forward, for responsible adult consumption, medical use, and research progress. We are fighting a common sense battle to eliminate an illegal underground and energize a national tax base.

For too long, while we were too complacent, our leaders have ratified statutes allowing for our sons and daughters to be jailed, our cars to be seized, and our scholarships to be forfeited. In certain places, moms and dads can still lose custody of their kids because they are caught smoking pot. It is an outrage and injustice Americans can no longer endure or countenance.

Last week in a Fort Lauderdale courtroom, I had to fight for custody for a single parent father who let his 17-year-old son smoke cannabis. He has two other kids, one already an emergency room doctor and the other at Harvard. We need an agency to protect us from Children and Family Services like that.

People just can’t take the absurdity anymore. Like Howard Beal in Network, we are shouting from the windows. Today, from Miami Beach to Maine, from Seattle to South Florida, we are saying ‘Free the Leaf.’  It’s not just to get high. There are valid medical and curative reasons to support normalizing marijuana.

Thousands of Americans who were living with HIV learned years ago that medical cannabis inhibited a ‘wasting away’ syndrome and enhanced their appetite. Others, like Elvy Mussika, a grandmother from Hollywood, Florida, found out smoking marijuana can alleviate her blinding glaucoma. She now actually gets pot monthly from the DEA, cultivated at a government-controlled grow house in Mississippi.

Scientists in Israel have discovered cannabis can control muscular spasticity and arthritic conditions amongst the elderly. One housewife in Manatee County, Cathy Jordan, has grown and used cannabis for a quarter of a century to combat Lou Gehrig’s disease. Acknowledging her use is a ‘life-saving condition,’ an enlightened prosecutor has declined to prosecute her. But now the sheriffs’ association is saying no, that pot is “dangerous.” No, what is dangerous is electing sheriffs who are stuck in the past enforcing Jim Crow laws that discriminate against minorities.

Those of us who smoked joints watching Janis Joplin and Jimi Hendrix in the 1960’s are now in our 60’s. We have seen pharmaceutical companies overdose us with a sea of prescription pills that have led to unanticipated consequences and multi-million dollar class action lawsuits.

None of us has ever died from weed, but we have all been victims of the war against it. If you want a cause to fight for, to get high on, this is it. It is a battle for freedom of individual choice. It is yours at stake.