Does Your Babysitter Smoke Pot?

Does Your Babysitter Smoke Pot? 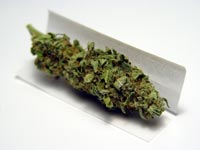 The way Nancy Grace on the HLN network screams about your baby sitter being on pot can make you think she is on crack. But the truth is she is not. She is in show business, knows a good topic, and can figure out how and when to run with it.

Last week she had three shows featuring the President of the National Organization for the Reform of Marijuana Laws. That would be me. Each time, she held the dump button, controlled the microphone, and was able to cut me off at will. No, that usually does not happen to me, but I was a guest on her show — in her court. But cannabis has become a cause for all America. We live with facts. She sensationalizes fiction.

America has turned the corner on the possession of marijuana. No one wants it to be a crime anymore. Welcome to the party. You can now come out of the closet. Legalization, education and regulation have always made so much sense. It has worked with alcohol and tobacco and the use and consumption of both is down across America. I don’t want to fool you. It is not that the world is pro-weed. Everyone is just anti-prohibition.

The entire drug war has just been a jobs program for cops. Let them do real work and arrest criminals, not cannabis users.Nancy Grace chose to defend an indefensible topic that she is eventually going to lose. Her position was so histrionic in today’s America that Saturday Night Live did a spoof of her last weekend. Let’s face it. Pot smokers have become like the pods in the ‘Invasion of the Body Snatchers.’ We are everywhere. We have taken control. Everyone who was in the closet about cannabis is coming out, from the President of the United States to the Democratic senator in Florida, a former astronaut, Bill Nelson.

Mind you, pot smokers and cannabis users have always been here, from Woodstock to Washington State. Many of you have been hiding behind closed doors, afraid to admit that you smoke. Whether you are a kid walking down Main Street in Middletown, USA, or a retiree living in Coral Gables, you smoke weed. Or someone you know does. And you know nothing the government has ever said about it is true. Reefer Madness, my ass! The only reefer madness has been the government’s prohibition against responsible personal consumption. We  it was a farce then, and everyone is finally willing to say so now.

Legalization is not the experiment. Prohibition is, and it has failed dramatically. That cannabis is still illegal in 28 states stinks. Men with badges and guns can break down your doors, lock you up in steel cuffs, and bring you to jails where you are put in human cages. Legalization and regulation is so much safer. What you knew back when is still right today.

No more deals in dark alleys and no more cartels in criminal conspiracies. Let’s just have small businesses properly run, licensed and taxed, marketing the latest products and strains, from purple diesel to green kush. Free choice means Marlboros or Mary Jane; whiskey or weed. As long as you are an adult and not harming anyone, you must have the right to have your government stay the heck out of my life.

Our time is here. Light up your joint. Smoke where and when you want, but preferably not in an elementary schoolyard. Recreationally, medically, spiritually, everything tastes better with cannabis. Sex is better. Food is better. Watching Nancy Grace is easier. In fact, next time I do her show, I think I am going to get lit before the lights go on. How else do you come to grips with a delusional woman who is ranting about cab drivers smoking weed when every other person on the road seems to be a congressman on coke or mayor on meth?

The only time cannabis is dangerous is when a cop finds it on you. If Nancy Grace wants to be known as a victim’s rights advocate, let her speak up for over 29 million Americans that have been arrested for the possession of cannabis over the past 30 years. How crazy is that? And what does it say about how many have used it? Licensing, age controls, taxation, regulation, and an end to prohibition is so transparently the way to go.

It is not just that cannabis is not harmful; we have proven it medicinally invaluable. From treating muscular spasticity to glaucoma, marijuana is a healing alternative. Let’s live and let live. Let’s do no harm to each other. If we are concerned about drug abuse, treat the person and arrest the abuse. Don’t lock up the patient. We do not need any more pot prisoners.People like to say that cannabis is objectively less harmful than alcohol, and therefore it should be legalized because of that. No, it should be legalized because any abuses related to cannabis should be treated as a health or medical issue, not a criminal one.

No one has ever died from weed, but damn, society has seen its freedoms die away because of it. The criminal treatment of marijuana has opened the door to illegal seizures, outrageous forfeitures, massive fines, and unjust confiscations of personal property. We have sold our constitutional souls to arrest weed, and now it is time to free the leaf.

It is true that the majority of Americans now favor decriminalization of marijuana, and even more want legalization. One thing is sure, and that is we need to end criminalization. We have stood by and let people be wrongly placed in horrible jails with steel bars and strong locks, all to prevent them from consuming a substance that does them no harm. We have perpetuated an injustice. We owe it to ourselves to undo the hurt our deafening silence has caused.

We have harmed the fabric and freedoms our country held dear, discriminated unjustly against minorities, and denied to Americans the desires of its majority. There is no cannabis calamity or catastrophe in America. There is an awakening that will soon shine a soothing light on the rest of America, and with luck, one day, even Nancy Grace.